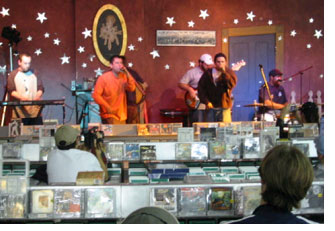 The next generation of music buyers won’t be shopping at Wal-mart and Best Buy, they’ll be visiting their local music store or staying at home.

Local music stores
What if you could walk into your local neighborhood music store and listen to the hottest new local area artists – live? What if that music store turned into a live band juke box? That’s the idea behind the fast-growing trend of independent music alliances, typically about 30-40 non-competing small music stores, with the first being the Coalition for Independent Music Stores. Record labels pay the stores to promote new talent to specific audiences, which is important because…

Digital music stores
More and more music is downloaded every month, purchased or not. The main reason most music is downloaded illegally is because music lovers don’t have the option to buy music digitally. Pioneers like the Apple Music Store will change that. What this means is that music buyers will find it superior (and cheaper) to buy songs online rather than at national chains, but still visit local stores to get live and direct info on new music and artists. By the same token, you should be able to vote online for the kinds of bands you want to hear live at your local music store, just the same way people are voting by the millions for the next American Idol.

By the way, Amoeba Music in San Francisco is a great example of a CoolTown music store.