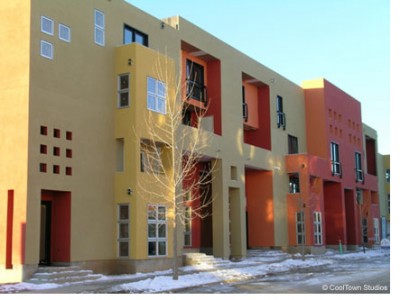 His name is Kiki Wallace, and he’s the founder of a striking new town called Prospect located outside Boulder, Colorado, as introduced in yesterday’s blog.

I’ve known him for a few years since the town first broke down – he was one of the first to get his hands on the VW New Beetle when it came out, and he could never attend a conference because he didn’t have the patience to sit and watch speakers who talked about what he was already doing. Well, he couldn’t really sit still regardless. The streets in Prospect, such as Tenacity Drive and Incorrigible Lane are not a coincidence.

In other words, Kiki Wallace is a visionary, an entrepreneur and a little bit of a cowboy, and we need more people like him building more places like Prospect (especially in urban areas) because there are more than enough people who want to live and work in them.