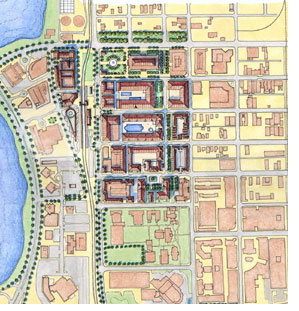 As presented yesterday, first came the renaissance of the downtown, then CityPlace, now West Palm Beach’s first transit-oriented development (TOD). The buildings in the bottom right of the image make up CityPlace – notice the pie-shaped ‘square’ that is the epi-center of free entertainment in the area.

With three times more housing than CityPlace (2000 residences vs 600), a million s.f. of office (CityPlace has none) and 100,000 s.f. of retail (a third more), it’ll be a true urban village in scope. Centered around a Tri-Rail station, the tell-tale sign of who will live there will be based its housing affordability, something the City is working on right now (especially since they own the 36-acre site), and the types of retail/entertainment venues.

Contrast the ‘positive space’ urban fabric of these projects to the ‘negative space’ (i.e. leftover space) of the other areas. I stayed in the isolated high-rise hotel shown in the bottom left of the image, and most every one of its guests chose to taxi over rather than walk the 1-2 blocks to CityPlace! That’s how negative space in an auto-oriented urban fabric will subtract from street life – and add to traffic.

What would be your concerns for such a new development? Speak your mind below…