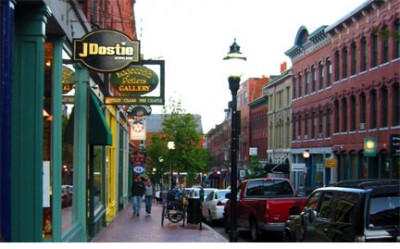 It looks like the American Dream my be redefining itself, or maybe the image of the single-family house with the backyard and white picket fence never really was more than a huge campaign by GM and home builders to sell more of their product to the masses. It worked, but it’s weakening now. Coincidence that so are GM and mall developers?

Census studies show that major metropolitan areas are losing population, and since the same studies show downtowns are increasing in population, it essentially means they’re fleeing the suburbs. Their two choices?

One is to the aforementioned downtowns, which are more expensive to live in, but that just shows you how desirable they are.

The second? Just about anyplace that’s more affordable, since owning and maintaining a big house on a big lot (ie typical homes in subdivisions) in most metropolitan areas is relatively costly, especially if you don’t have 2.3 kids. Of course, the cities with smaller homes that are more walkable and closer to amenities will attract the most, but you already knew that.