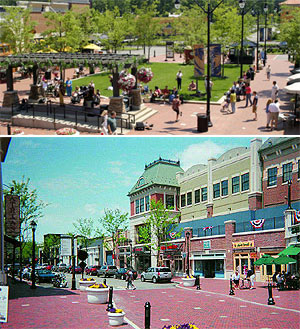 That’s the question answered by the Urban Land Institute, and the answer is that at least for the newly built town-center-style shopping centers, they’re trying.

All five examples provided in the report are unaffordable for most as far as residences and offices are concerned, and largely consisting of chains, but what’s noteworthy is that the developers are providing public spaces for everyone that have the potential for being third places.

First & Main, Hudson, OH – profiled in the previous entry, is adjacent to a 200-year-old village green with a new library.

What public events and amenities would you prefer? Comment below!