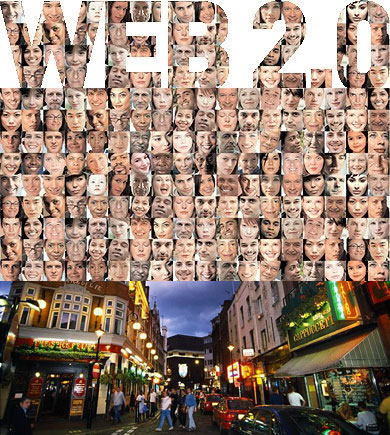 Its wikipedia (a Web 2.0 product) definiton: perceived or proposed second generation of Internet-based services – such as social networking sites, wikis, communication tools, and folksonomies (don’t worry, we’ll go through these) – that emphasize online collaboration and sharing among users.

The creative class is well documented, as well as its connection to job growth. These are the innovators (ie the Steve Jobs, Bill Gates, Richard Bransons) that start new companies and invent must-have products, and it happens in regions of intense creative collaboration (ie Silicon Valley, London, etc.) Introducing them to Web 2.0 is like giving Lance Armstrong a motorcycle at the Tour de France.

Before we blend the two potent elements, a little summary of what makes up Web 2.0:

Wikis – Imagine if a community of regular users (ie ‘pro-amatuers’) could add, remove and edit much of the content of a website rather than its owners – in fact, they monitor one another (like eBay). That defines the success of Wikipedia.

Social networking sites – Building community on the web by having individuals define themselves and their interests, skills, objectives, forming the basis to make connections with others. You’ve heard of MySpace. There are now hundreds, growing toward thousands.

Then there are blogs, discussion boards, and all those user reviews on Amazon by people you don’t know from Adam, but read anyway. Overall, if you’re a true Web 2.0 user, your email inbox would start to get lonely (which to many, is a great thing).

For a more detailed summary, check out this graphic and this summary by Tim O’Reilly, the originator of the term Web 2.0.

Tomorrow, what happens when you combine the two in a city…