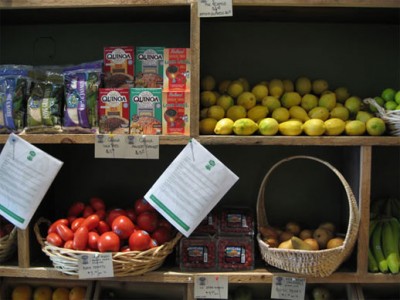 Locavore is the Oxford Dictionary Word of the Year – a local resident who tries to eat only food grown or produced within a 100-mile radius.

As of December 14, 2007, there’s now a place in the U.S. for a local resident who tries to buy only food grown or produced within a 100-mile radius. Located in the hip Williamsburg neighborhood of Brooklyn, Urban Rustic, a 1200 s.f. grocery store and cafe will be stocked primarily with that in mind. It shouldn’t be a surprise that one of the shop’s founders produced and directed the recent fast-food-oriented documentary, King Corn. As you can see in the picture, each of its wares has a story, and that carries the do the right thing status today’s shoppers are looking for.

However, the gold standard is Sussex and the City in Brighton, England. Not to discredit in any which way at all the millions that the Urban Rustic folks will impact, the Sussex and the City grocery offers all of its products from within a 50-mile radius of Sussex.