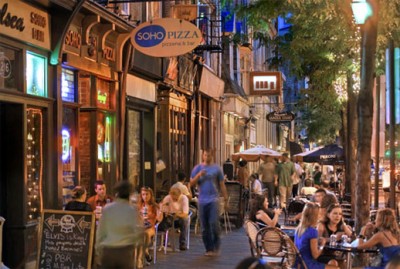 Maybe you should think twice about investing millions in that fancy new performing arts building to revitalize your city. While Richard Florida has long de-emphasized such large-scale investments, professor Mark Stern, Co-Director of the Urban Studies Program at the University of Pennsylvania provides a detailed answer below to the question, “Well then, now what?”

“While the arts are commerce, they revitalize cities not through their bottom-line but through their social role. The arts build ties that bind – neighbor-to-neighbor and community-to-community. It is these social networks that translate cultural vitality into economic dynamism.

What happens when creatives build a social network? You’d be fortunate to experience a natural cultural district.

“Analytically, these districts are of interest because of density’s side-effects. Economic developers note that clusters encourage innovation and creativity – a spur to cultural production. At the same time, a cluster of cultural assets often pushes a neighborhood to a regeneration tipping-point, attracting new services and residents.

What is striking about this phenomenon is that it occurs without policy intent.”

Image: Nightlife in Old City, Philadelphia, by B. Krist.