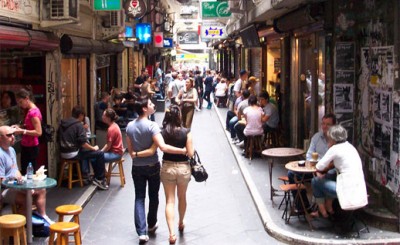 Today’s entry will be a little uncommon, but rather extraordinary as we present Urban Cultures’ detailed presentation behind their Cultural Quarters: Necessary Conditions and Success Factors checklist. There really are few if any firms that have such fine-grain knowledge in helping cities invest in such places, and we’re glad to be associated with them.

An essential prerequisite for a vibrant cultural quarter is the presence of cultural activity, and this should include cultural production (making products and providing services and experiences) as well as cultural consumption (people going to shows, visiting venues and galleries). Of special significance is the presence of venues. These should be as varied as possible, including at the small and medium scale where the objective is to encourage a more active street life. As well as performance venues, there should also be rehearsal and practice spaces. There should also be private galleries and performance venues. It is important that as many venues as possible remain open in the evenings as well as during the day.

Second, successful cultural precincts tend to have a strong evening economy. The possibilities for more activity around the clock, with increasingly flexible work patterns and the new anthropology of consumption (lifestyles), are there to be exploited. Very often, there is a close correlation between cultural quarters and at least part of a city’s evening economy. Indeed, much of the attraction of cultural quarters is that it is possible to merge the day into the night, and formal cultural activities with less formal pursuits such as meetings friends for a meal or a drink.

As a rule, the most lively and interesting cultural quarters tend to be places of complex variety, with a large representation of small-scale business activity which trades not only with ‘consumers’ but with other businesses. Successful cultural economies are characterised by increasing volumes of trade, constant innovation and the building up of new products and services, networks of suppliers and purchasers. Often now referred to as ‘post-fordism’ or the ‘sub-contracting-out mode of production’, this was always a feature of city economies before modern industrialisation. Thus, the successful cultural quarter economy will be as complex and intricate as possible with myriad networks of firms – and, crucially, a high proportion of small and medium enterprises (SME’s) inter-trading and sub-contracting. This might well include activities such as print-shops, specialist retailing, photography labs, graphic design and so on, and artists studios.

Within a cultural quarter, it is also axiomatic that a good proportion of such businesses will operate within the creative and cultural industries. The creative sector forms part of what is now widely regarded as a potential growth sector globally, notably in a series of growth clusters. The creative (previously the cultural) industries include: music, commercial photography, graphic design, publishing, fashion, pop videos, film and television. What they all have in common is the concept of creativity as a source of added value. Creativity generates new ideas, new ways of working and new products. The creative industries add to the stock of work that makes up a city’s economy.

The creative industries are widely seen as quintessential knowledge age industries involved in the creation and communication of meaning and entertainment; hi-tech, and requiring a high skills base. They generate large turnover world-wide, they create and sustain popular cultural icons and they are shaped by and help to shape fashion, identity and sub-cultures. The products are CDs, television programmes, books and magazines, videos, rather, films, fashions, records and tapes. They require hardware (equipment, technology, studios) and software (creative people, image-makers, ideas, sounds). As the wealth of cities grows and rents increase, such activities can come under threat from rising land values and future development plans. As Sharon Zukin pointed out all those years ago, the danger is that they will be displaced altogether.

In turn, the creative industries do much to stimulate derived consumption in tourism, catering, retail and leisure, and hence cafe culture, specialist retailing and private galleries.

It is not possible to conjure up new businesses – especially in knowledge and skill intensive activities such as the creative, design and cultural industries – out of thin air. There must be a ready supply or a potential supply of skilled, educated and creative people willing to set up in businesses for themselves. Quite often, a large percentage of current university graduates intend or would wish to set up their own business. These graduates are the best prospect for business creation in the creative industries. It is no surprise, then, that many cultural quarters have strong, sometimes formal links, with Universities and other education providers.

The public realm and associated semi-public spaces provide the terrain for social interaction in successful urban places. If public spaces are well-designed, safe and comfortable, social activity can develop through varying degrees of contact, ranging from the polite greeting, to meeting your future partner for the first time, to renewing and maintaining established friendships, and even as a way of understanding the world – for example watching men digging a hole in the ground! The upshot is that in a good public space, necessary activities quickly take second place to optional activities, from which varying degrees of social activity can emerge, and in the end good places create their own dynamic of watching, being watched and meeting.

As well as being hi-tech, the creative industries are high-touch industries, in that people still need stimulus of meeting other people. Cultural Quarters, then, are a means of combining access to non-local markets (via technology) with the playing out of ‘urban lifestyles’ in particular urban locations. Policy makers have also realised that artists and creative producers and those they attract pursue a particular lifestyle where work and ideas and friendships are pursued in coffee houses, bars, restaurants, clubs, venues, galleries and other semi-public meeting places. This layering of mixed use is deemed to be an important aspect of urban living, and is part of the lifestyle offer to new urban residents. The upshot is that cultural activity and imagery has helped to create demand for inner city living and urban lifestyles, although this brings with it attendant problems of rising values and ‘gentrification’. It is important against this backdrop to retain small and medium scale venues, arts facilities such as theatre workshops, artists’ studios, local facilities for community art groups, and premises for small businesses.

And so, to remain successful, a cultural quarter will need to maintain what it is good at, but also to be flexible, highly adaptive and embrace change, new ideas, new ways of doing things and new work. Failure to do so might mean that the cultural quarter will disappear entirely, or become simply a collection of publicly-funded venues and facilities, or else an emblem of former culture – ‘heritage’. Many cultural quarters start off well, but tend to ossify or disappear altogether, to be taken over by other competing uses (offices, apartments) or to become part of the heritage industry. Others might well continue to develop and grow into the future, although success too can have its dangers where low value uses are driven out of successful places, small scale creative businesses and cultural organisations must leave the area. This brings us to a conundrum, in that at least a proportion of the activity found in cultural quarters might well require governmental support in order to survive in situ.

Finally, there is the question of scale. Some cultural quarters are simply too large and unwieldy to work well as social spaces, for example the Barbican in London or the new cultural center in Hong Kong. Partly this is a question of ‘heroic’ architecture being allowed to dominate and for the buildings themselves simply to be too large. Large buildings take up large footprints in an area, and so reduce permeability and the amount and quality of public space. Beyond this, cultural precincts can fail because they are too far away from other active places, such as a restaurant strip or a retail area, even other cultural venues. The important point for designers to bear in mind is that people walking will rarely go beyond a quarter mile, will only do so if the route is safe and interesting, and if there are places of interest (attractors) at either end. That is, if you can cross the road!