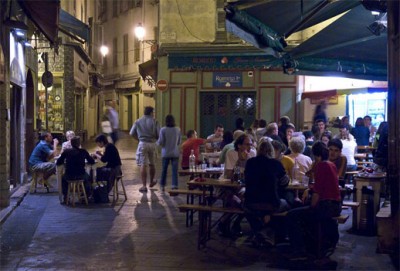 7. Communicate: This is what open source is all about – the ‘sponsor’ providing the business plan and updates as if it were a co-op, and listening to their members just as well. Here’s an example from a beta community agreement in New Orleans: “The purpose of the Broadmoor Beta Community is to provide NCD (the developer sponsor) with an identifiable group of future tenants and customers for a third place that is eventually established in the neighborhood. NCD understands that the Broadmoor Beta Community’s commitment to the social and financial success of this third place is directly proportional to how much NCD listens to and incorporates the ideas and input of the Beta Community.”

8. Convene: Crowdsourcing works best when people meet face-face to make decisions, or at least have a solid deadline (resulting in virtual convening), rather than contributing individually on their own time. As they say, the more things change, the more they stay the same.

9. Include: Two things here: 1) Ensure you’re getting proper representation of the neighborhood that you’re working in, even if it means taking a little more effort and time to find them; and 2) Provide some training or ongoing assistance if they lack social network skills, much less be social network bilingual. While technology has helped bring people together, it shouldn’t be an excuse to exclude anyone either.

10. Acknowledge: Recognition is a powerful motivator. Are you still recognized for contributing to nonprofits years ago, or forgotten among the masses? People are recognized in every beta community project for their efforts on a monthly basis – sometimes being rewarded with free dinners to favorite restaurants like with CreativesDC, or even with profit sharing as with the Elements restaurant.

11. Process: This is where the rubber meets the road. How do you take the collective values of hundreds of participants and interpret that into design and programming that inspires them? This is a matter of working with a new generation of architects and developers with not only the skills, but the mindset to be able to professionally synthesize ideas into a tangible form.

12. Be Critical: Innovation can’t happen when there’s groupthink – “a type of thought exhibited by group members who try to minimize conflict and reach consensus without critically testing, analyzing, and evaluating ideas. Design by committee doesn’t work. But, if people were courageous and stated what they really wanted, “That side alley should be outdoor dining for cafes!”, perhaps we’d have more inspiring destinations.

Which of these six principles are most important to you?