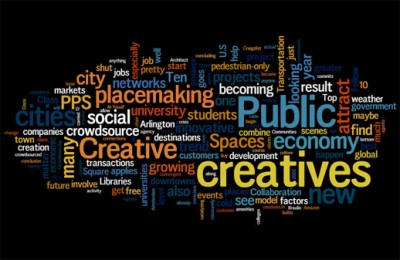 Over 1400 entries later, I thought it’d be interesting to post what the collective content is on this site, as illustrated by the tag cloud above. Click here for a larger image.

While it’s not surprising to see ‘creatives’, ‘creative’ and ‘placemaking’ among the most popular tags given that it’s in the site’s tagline, ‘public’ sure seems to have a lot of unexpected exposure. The ‘public’ that’s used in this site often refers to the public gathering places and spaces that bring people together, whether it’s just two or thousands, and it signifies where creatives thrive best. Examples primarily include pedestrian-oriented plazas, squares, streets and sidewalks, usually infused with third places.

I think ‘public’ also culturally speaks to creatives’ connective nature on the web, primarily through the public content produced by the social networks behind Google, eBay, Amazon, Yelp!, iTunes, Netflix and the thousands of special interest groups. It’s just a matter of time before such creative collaborative energy goes public in the built environment.

Thanks to Christian MacAuley of FabApps for the reference.