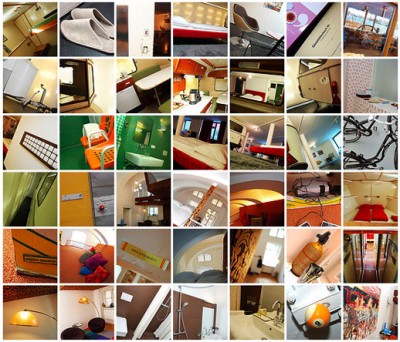 One way to more deeply experience a city is to spend time in its cultural niches. Well, the Pixel Hotel in Linz, Austria is taking that to heart, with its six entirely iconoclastic rooms distributed throughout the city.

Pixel on the water: Get to know the city industrial area on a 1955 tugboat via three original restored cabins that create a suite for two.
Pixel in court: Within the museum district a former cabinetmaker’s workshop is now a 1000 s.f. modern loft space with a â€˜60s-vintage camping trailer as living room with freight elevator as walk-in closet.
Pixel with garden: A working-class flat and a storefront features a private garden, and the flat-turned-bedroom-and-bathroom hosts a sound & image that retells the neighborhood’s classic working class history.
Pixel in the textilpassage: An architectural art piece unto itself, situated adjacent to an art gallery in the city’s historic neighborhood.
Pixel in der Galerie: If you ever wanted to stay in an art gallery, this is it – complete with bed as art piece.
Pixel in der VolkskÃ¼che: No information, but appears to be a stay in a majestic historic building.

It’s a pricey night’s stay, but there’s no reason why cities can’t offer both similar high end and lower cost versions of the Pixel.