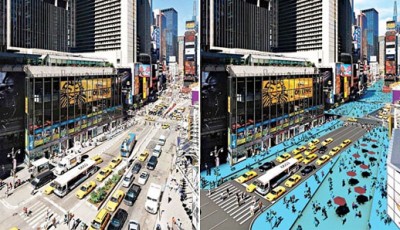 The question often asked in Michigan, and the U.S. in general nowadays, is ‘What about Detroit?’ The mass exodus of jobs is well known.

What’s less well known is that much of the city’s historic pedestrian-oriented districts, the very kinds of neighborhoods that are the core magnet for economy-building knowledge workers, have long been destroyed. Not only that, but the present-day urban fabric is immensely auto-oriented, with extra-wide streets and machine-like buildings. So, even if Detroit’s economic development powers were able to attract, say, a Google office, Google’s workers still wouldn’t want to work in such an impersonal landscape geared to outdated technology. It doesn’t fit the brand, you could say.

But as stated in the Next American City article, Should We Abandon the Uncreative Class? No, we don’t, and here’s a couple of economic-oriented placemaking suggestions…

1. Build on current solutions such as Detroit’s urban placemaking bright spot, Campus Martius, which has itself attracted $450 million in investment, 300 condos and high tech companies.

2. Follow New York City’s Department of Transportation lead (how ironic, when you think about it) and invest in reinventing Detroit’s urban fabric towards one that actually appeals to people. See image above of the transformation of Manhattan’s Broadway Boulevard.

3. Find a Bart Blatstein and develop a culturally unique destination, like his piazza in Philadelphia surrounded by new condos, offices and local businesses.

As most CEOs will tell you, the number one determining factor for where companies relocate is based on where their employees are willing to be. So for cities, that simply means focusing on investing in places that people truly want to be in.