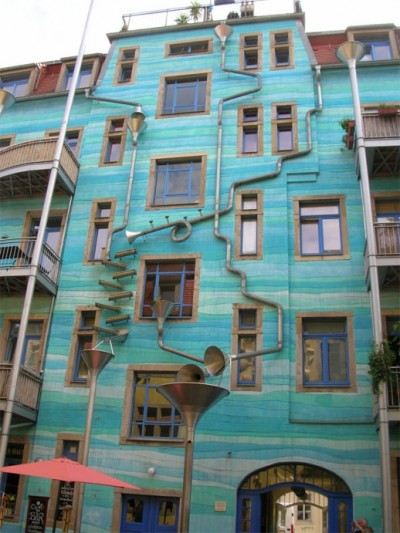 If you think it’d be cool to live in a building like this, you’re probably not alone. The building plays music through its instrumental drainpipes when it rains, and is part of the a series of whimsical courtyard buildings in Dresden, Germany known as the KunsthofPassage.

However, why don’t we see more creative, humanistic buildings like this, and what can we do about it?

First, the short term bad news. The vast majority of real estate investment dollars won’t touch this kind of project because it’s too small, because the money is in the big head and not the long tail. The long term good news is this will change in 10-20 years when investment management evolves to invest in the more lucrative ‘long tail’.

1. Crowdsourcing investment models (ie crowdfunding) that allow people to collectively invest in such developments themselves.

2. Emerging generations of real estate developers that understand crowdsourcing and how to invest in the culture of the rising creative economy, such as Kevin Cavenaugh with the Burnside Rocket, Rick Destito with the Gear Factory (the rendering of the proposed 5-story building redevelopment for creatives does not do it justice) and Jamal Williams/Vance Gragg with an upcoming development in DC.

If you live in DC, join in as we’re experimenting with a new web app to allow people to submit their ideas for creative inspiration, the most popular of which will be considered for investment, at RemixDC.com (the site/URL will change to remixdc.com soon).