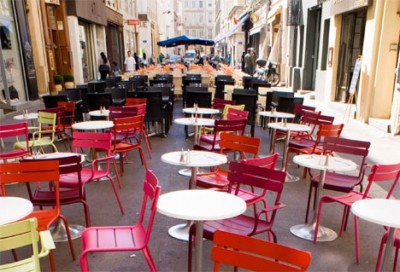 Ah, the power of crowdsourcing…

Realizing the need for a new generation of terms for pedestrian-only streets, what better process than to ask groups of creatives for suggestions, both virtually and in person. Here’s their starting list of informal creative class market driven terms that they feel communicate a shift in how we think about streets:

Slow streets – There’s the slow food movement, the anti-fast food campaign promoting taste, culture and the environment as universal social values, which inspired slow cities. So you can guess what kind of streets would they have… no cars, lots of outdoor dining with slow food (but hopefully not slow service!)

Street 2.0 – Ok, another buzz word, but the creatives understand. To support Business 2.0 and Web 2.0, this means wifi-enabled third places supporting throngs of day workers using the street as their informal office at all hours of the day…

Remixed streets – You’ve heard of remixing songs – composing alternates based on a mix of technologies and sounds toward a certain crowd. A remixed street for creatives would take a typical street and remix it with all of the above to suit their tastes.

Now, replace ‘streets’ with piazzas and third places, and remix all over again.