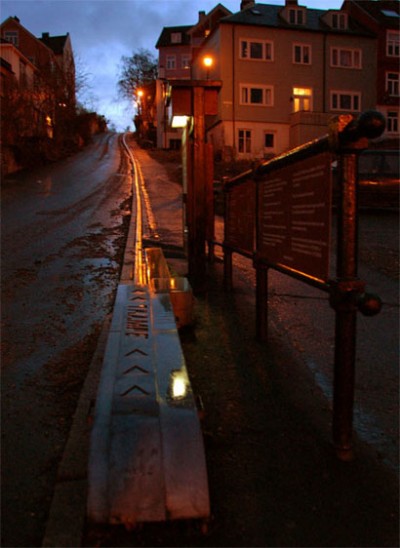 How can you tell a city really cares about bicyclists? By spending the money to design and install the world’s first and presently only bike lift to encourage biking to popular, but difficult to reach places. In this case, it’s a steep hill between the city’s main university and its downtown.

Built in 1993, the ‘Trampe’ (bike lift) has been averaging 46 uses/day since. Cities today can build one for $450-$550 foot, or as the company website says, “the same building costs as an ordinary bicycle road in urban areas.”

It’s a great example of the city and private sector working together – local officials were looking for ways to increase bicycle usage, including lifts, while bicycle enthusiast and inventor Jarle Wanvik created a working prototype. Today, 41% of the lift users say they’re using their bikes more often due to the Trampe. It $18/year for a keycard to use it, or you can rent a free one for a day.

There is definitely evidence for bike lifts in other cities based on observations of the Paris bike sharing program, where piles of bikes are ending up at the bottom of hills. It’s a combination of people not having the stamina to bike up steep hills as well as not wanting to sweat themselves to the point of being unpresentable.

Check out how it works here.