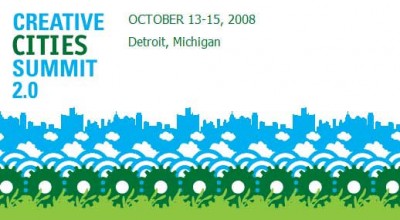 The Creatives Cities Summit 2.0 was held in Detroit, Michigan, October 12-15, 2008, the sequel to the first one in Tampa in 2004, hosted by Creative Tampa Bay. The purpose? Provide models for growing a creative economy. Why Detroit? It was more a case of Detroit needing the summit more than any other city, and by that token, having the most aggressive leadership to get there – see Michigan Governor Granholm’s Cool Cities Initiative. Still, creative is better demonstrated tangibly rather than through policy.

Perhaps it’s helpful to highlight the baby boomer-oriented keynote speakers that represent the content of the summit:

John Howkins – Author of The Creative Economy and proponent of intellectual property laws.
Richard Florida – Creativity economist and author of Rise of the Creative Class, Flight of the Creative Class, and Who’s Your City?
Bill Strickland – Based in Pittsburgh, one of the most extraordinary community organizers of our time, especially for centers that train people in creative professions.
Tom Wujec, Autodesk – Author of Return on Imagination: Realizing the Power of Ideas, an expert in visual communication, demonstrated via capturing the entire conference.
Doug Farr – Author of Sustainable Urbanism, and the green development expert for the event.
Ben Hecht, President/CEO, Living Cities – Founder of One Economy Corporation, assisting 150,000 low-income people throughout the world.
Charles Landry, COMEDIA UK – Author of The Art of City Making, based on The Creative City: A Toolkit for Urban Innovators.
Carol Coletta, President/CEO, CEOs for Cities – Host of the weekly public radio show Smart City, which is often referenced on this site.
Diana Lind – Editor of the quarterly magazine on progressive urban innovations, Next American City.
Majora Carter, Co-founder, Green For All – Established one of the first urban green-collar job training and placement systems, and continues to do so.
Pier Giorgio Di Cicco – A widely published urban philosopher and poet.
Dean Kamen, Founder/President, DEKA Research & Development Corporation – Holder of 440 patents, including the Segway, and focused on transitioning university talent into the creative economy.

See their full bios here, and check out the CEOs for Cities blog for summaries of the ideas presented at the event.