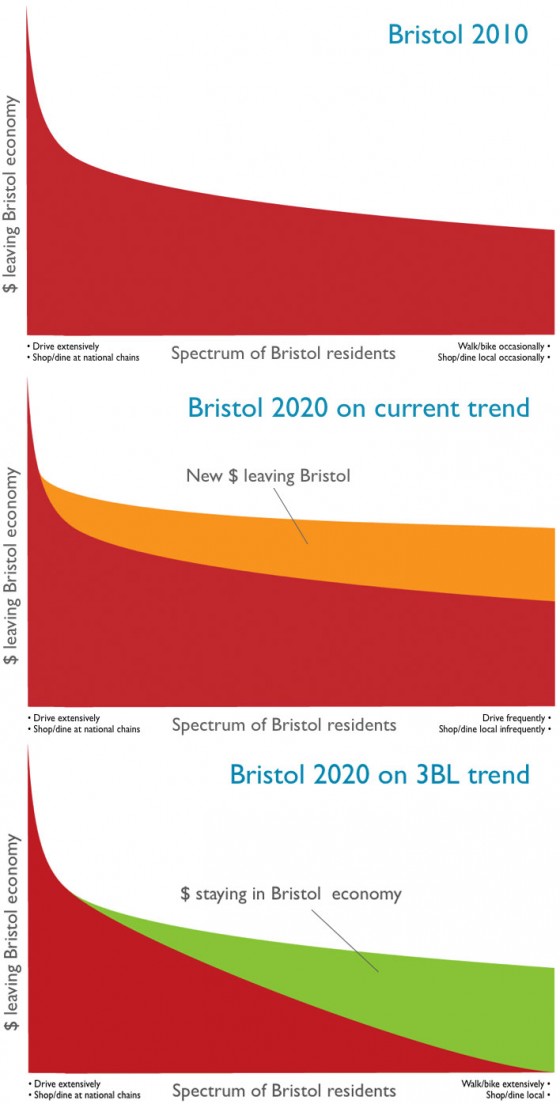 What’s happening in Bristol, Connecticut (pop. 61,000), home of ESPN, is pretty representative of small cities and towns across the country, with a vacant downtown surrounded by auto-oriented sprawl of national chains, isolated office buildings and subdivisions. What’s about to happen in Bristol however, may be a redefining of the American Dream, and a model for these same cities to follow.

Currently, Bristol’s economic retail analysis shows that the largest ‘retail leak’ by far, that is, net dollars being spent outside of the city rather than within it, is a minus $45 million gap at gas stations. The second biggest gap? $27 million leaving the Bristol economy for food services and drinking places (ie restaurants, bars) outside the city. As you can see by the top graph (Bristol 2010), most every resident is spending a significant amount of dollars that leave the local economy forever, from those with three cars, a mcmansion, and prefer shopping at big boxes, dining at national chains on the left side of the graph, to those on the right side of the graph who drive occasionally (a car is still a necessity for the most part) and prefer local shops and restaurants, but can’t find many options.

However, Bristol, like many other towns with a sustainability consciousness, is embarking on a different path, one towards a triple-bottom-line (3BL) future, as illustrated by the bottom graph, “Bristol 2020 on 3BL trend”. Notice that those on the left of the graph haven’t changed their 3-car, national chain lifestyle at all, and they will probably never change. That’s fine. Just look at those on the right who will soon have a walkable, mixed-use town center with attainably-priced housing and a multitude of cultural amenities, including local, indies places to eat, drink and socialize… and for the first time ever have the option of jettisoning their car. So that’s reducing the need for residents to spend that $45 million to benefit the likes of Exxon and BP, and enjoying the $27 million at local downtown restaurants and bars instead. Learn more about that effort here.

See all that green in the graph that’s replacing the red? That’s money now staying in the local economy rather than leaving, instead being spent on the local cultural amenities that both strengthen the economy and quality of life.

Now that’s a future worth sticking around for.