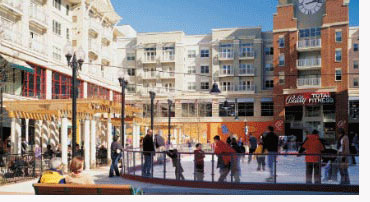 No. There will be one day, but right now there really isn’t anything close. A true piazza is an urban square enclosed on all four sides by buildings to make a grand outdoor ballroom of sorts.

The closest new development resembling a piazza is Pentagon Row by Post Properties, image below. It’s much better than what’s been developed over the last 50 years. However, they’re calling it a piazza, and here’s why it’s not:

1. It’s only enclosed on three sides, not four.
2. Just as a grand ballroom has an open floor, so should a piazza. This plaza has permanent landscaping all over the place, but at least they left enough open floor for an ice rink. I skated there at night, and I felt more enclosed by the street lamps and trellises than the buildings, which also looked more suburban than urban.
3. Just as a grand ballroom has flat walls (sounds silly doesn’t it?), so should a pizza. Unfortunately, the “walls” of Pentagon Row are all fighting for attention. In contrast, what’s cool about Drubrovnik is that the architecture is beautifully subtle, providing a soft backdrop to highlight the real attention-getters – people. What would YOU rather look at?