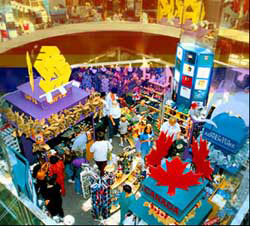 Target is easily the department store of choice by urbanites and creatives (who endearingly pronounce it tar-ZHAY) simply because it combines two of their favorite qualities – affordability and classy talent-over-big-name design.

Still, if such a national chain is still sending most of a community’s dollars out of town, is there any viable alternative?

How about a department store that stocked what you wanted, say, because you owned it?

Residents of Plentywood, Montana did just that – establishing a 10,000 sf community-owned store where residents bought 18 shares in the venture for $10,000 a piece. (Many single shares are owned by groups of five or six people.)

It inspired nearby residents of Malta, Montana to open their own department store, selling shares for $500. It’s not only been profitable, but it actually anchors the downtown.

Organizers in Powell, WY did likewise and has turned a profit, avoided debt, includes a board of directors made up of local merchants, and a manager who is a veteran retail buyer.

Two more are underway in the area.

Residents in Plentywood refer to their store as “our store” – not “the store” or “that store.” Where’s “our store” in our town?

Image: How about a department store that featured locally-made clothes inspired by designs from around the world?