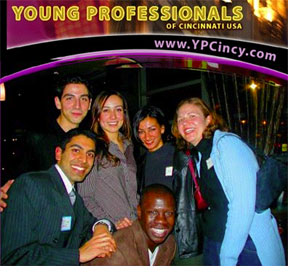 What seems to be causing a stir in Cincinnati that a turn-around is imminent? Diverse leadership.

“In Cincinnati, five of the nine city council members are younger than 40, and four are under 35.”

Mayor Charlie Luken is making it a priority to create an environment that is conducive to YPs (young professionals), from catalyzing downtown housing to working with 275 companies to create a social volunteer network (a popular YP venue for meeting people).

A couple of YPs sparked a music festival that attracted 10,000. The chamber of commerce, which had already launched YPCincy, helped fund the next festival with the city this year and 25,000 attended.

“Nicholas Spencer, 25 and a native, is running for the council. He’s the founder of Cincinnati Tomorrow, a non-profit group that wrote a plan to make the city cooler, including helping black musicians record their work.”

Joff Moine, 30, grew up in Columbus, Ohio, went to the University of Cincinnati and lived in Chicago for five years, came back and founded the Cincinnati Sports Leagues for young professionals.

“Najoh Tita-Reid was mortified when P&G offered her a job at its Cincinnati headquarters. She was 25… She agreed to try it for two years, has been (in Cincinatti for) five… became a mentor and founded the Cincinnati Partnership to keep YPs (young professionals) of color in Cincinnati.”

Leadership by example, as they say, is the most effective form of leadership.