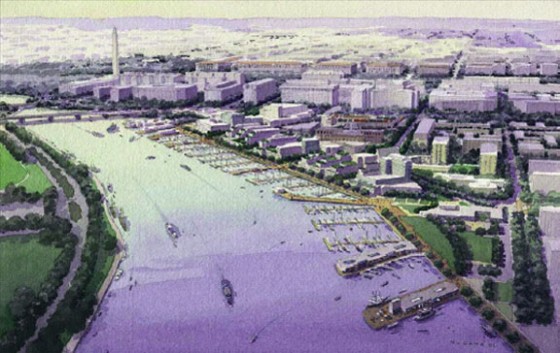 Urban Warfare: DC’s Unfulfilled Potential: Leadership, Tax Issues Hamper Growth (Washington Post cover story)
By D’Vera Cohn, Nov. 10, 2003 (link expires Nov. 24)
Second of two articles: While most cities have to scratch and scheme to attract out-of-town talent, the nation’s capital is among a handful of magnet cities that many young people feel they simply must experience…

For starters, D.C. limits the growth of its universities, probably in fear of losing government-oriented real estate. Second, any new housing has ‘luxury’ attached to it. Third, the city’s marketing efforts focus on the city’s stable job base, not its cultural and entertainment riches. Granted, with an economy based on the federal government, status quo leadership is fitting, but not if it is to ever become the world-class city it can so easily become.

So why do young people keep coming despite these obstacles? Understanding the ‘CoolTown three reasons’:
Jobs: Where else in the world can you have more influence in changing it?
Affordability: There’s enough edgy neighborhoods in D.C. to provide affordable housing for decades. The difference is that even the most undesirable are still well-designed.
Entertainment: This is the most underrated, misunderstood asset of D.C. How many other places can you mingle at an international happy hour, catch a free concert on the Mall, swing at the French Embassy and dance ’til the late morning in a majestic urban piazza – in one evening?

If the city’s universities begin expanding in the NoMa district (North of NE Massachusetts Ave.) with affordable housing and workplaces for entrepreneurs and artists, then D.C. may well have the formula for becoming that world class city.