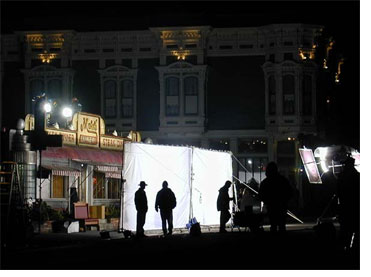 In a matter of a year or two, a handful of visionaries are able to initiate a business venture that generates $20-$200 million of profit within a few weeks of product introduction, gaining national recognition at the same time, and even changing people’s lives.

This is the film-producing norm for Hollywood’s movie studios, known as the Hollywood Model, a term popularized by Dr. Charles Grantham and his research on productive modern work trends. The movie studios act as a catalyst for, in Grantham’s words, “executive producers who commit to turn a “story” idea (a business problem or a project concept) into reality. They then assemble the cast, crew, and other resources needed to make the “production” a reality and to create positive, cost-effective change.”Then they disband, or exit stage left so to speak.

The need for a more flexible, project-focused, distributed work model became evident post Sept. 11, as described here. While it forced people to change work habits, it also allowed them to discover new opportunities for increasing both their quality of life and productivity.

The goal of CoolTown Studios is to build a community of diverse, prolific talent (a local Hollywood) that builds project-specific teams amongst themselves to produce award-winning ‘movies’ (ie new best-selling products, services and experiences).