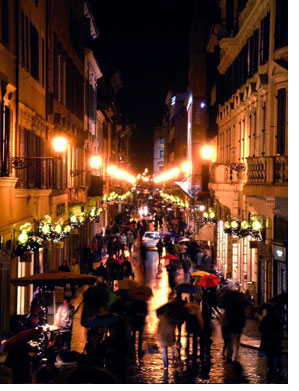 Surely this scene passes what the former mayor of Milwaukee, John Norquist calls the “Postcard Test”. Basically, will people buy postcards of such a scene?

So, what passes the test for urban postcards? Looking at postcard racks in the U.S., there are usually very few, if any, postcards of streets, squares or public areas. Instead, the urban postcards consist of buildings, monuments and sometimes aerials. The answer could be very simple…

Groups of cars don’t photograph well. Since cars fill the streets in the U.S., well, it kinda ruins the shot.

Groups of people photograph very well, and in places like Florence and Tokyo, shots of the streets and squares turn out quite well, no matter how bad a photographer you are.