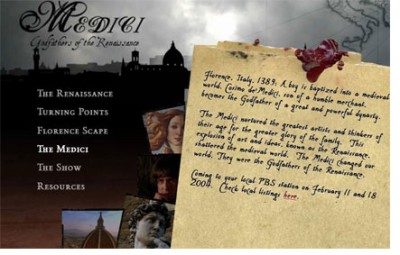 Must see TV: PBS broadcast the first of two 2-hour parts of Medici: Godfathers of the Renaissance. If you’re looking for some inspiration (minus the medieval bloodshed) to attract the kinds of creatives that can manifest a renaissance in your town, this is good watching.

The Medici were a rather humble family that rose to power in Florence through a matter of luck, relationship building and business acumen. The Renaissance literally began when Cosimo Medici befriended and hired a raging genius of an architect, Filippo Brunelleschi to design Florence’s grand dome for an overly ambitious church that was domeless for over a century. The success of such bold, calculated risks by the Medici heritage fed upon one another, resulting in works by artists, architects and scientists (Leonardo, Michelangelo and Galileo) that the public may never have known otherwise.

The narrator referred to them as very modern for their time. Interestingly, their business approach of investing in the creative class is considered progressive today.

Watch Part 2 next week Wednesday on PBS, or you can order the DVD here.