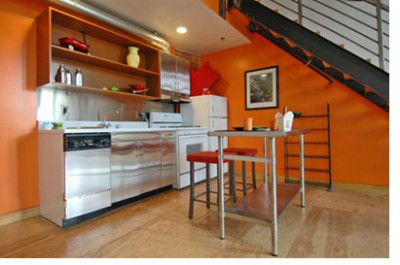 First of all, there are people with low incomes, and people with decent incomes who can’t afford homes. The former deals with government policy/subsidy, the
latter deals with what the private sector produces.

The reality: If you want to live in a great neighborhood, but can’t afford a 1500 sf home, what to do? Move somewhere else. That’s the smallest home you’re going to find in places like Silicon Valley. If not, move into an ugly garden apartment.

The near future: If you want to live in a great neighborhood, but can’t afford a 1500 s.f. home, what to do? Move into a 900 s.f. home, or even a 400 s.f. studio. The neighborhood adds more to your quality of life than the size of the residential unit. There are some sacrifices, but hey, we don’t all make $100K/year either, and a backyard is a privilege, not a right. Besides, many don’t even want the maintenance headaches of a larger home and yard. As Sarah Susanka says in her wildly popular Not So Big House book, a well-designed (and well-located) house half the size can be twice as livable (and twice as profitable). That’s the approach I took, and my home’s value more than tripled since 1999.

The problem is city officials (and vocal residents) still mistrust the word density. That’ll change over time. I’ve got a running blog series on the ‘new affordability’ here – nothing to do with government subsidies.