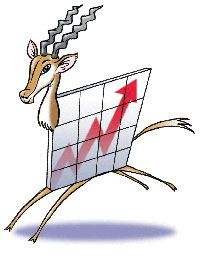 Currently, municipalities are a little behind the wave, focused too much on providing the infrastructure rather than what to do with it. For instance, there are many policies promoting the construction of cell phone networks, wifi hot spots and fiber optic grids, but few policies on how to turn them into jobs and gazelles.

Based on what the American Planning Association recommends, here are four elements needed for an effective ‘gazelle’ plan:

Technology infrastructure: Yes, you need the infrastructure, but this is just one of four parts, not the only one. In fact, it’s not even the largest one.

Policy considerations: Imagine the DMV on a slow day, and you’ll understand why some neighborhoods take forever to get broadband. Municipalities need to streamline the process for getting you the fastest internet connections, like via King County, WA’s eGov Alliance.

Applications: This is the golden goose egg – how to establish demand for all the supply being provided. The simplest emphasis for economic development agencies should be figuring out how to aggressively apply technology to advance their existing industries.

Institutions: Think MIT Media Lab, then think of how MIT helped make Cambridge the 23rd largest economy in the world. There’s no doubt universities play a major role in the CoolTown genesis.