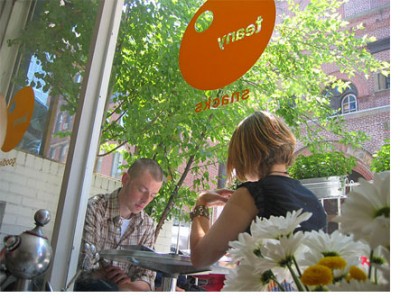 The more they are, the less you’ll see one-of-a-kind places like this cafe that tech-star Moby opened in Manhattan.

Why are cities so infatuated with attracting them? It’s not about job creation or tax revenue, as you can only buy so much coffee and furniture. It’s about the kind of customers they lure – creative, professional, hip – the kind of people that boost both the city’s economy and its innovative self image.

Unfortunately, it’s an old economy, mass production method of growing an economy – copy what everyone else is doing and expand like crazy. This is why we have three Starbucks within site of one another, or an Ikea opening in inner city Philadelphia with its standardized strip mall layout instead of integrating it into the urban fabric.. Also, for every one of these that the city attracts, they lose the most creative of the people they’re trying to attract in the first place.

Cities are much better off attracting these people via the modern economy, mass customization approach of promoting diverse places with unique venues designed in a compelling environment that makes people want to hang out there all day, places like college towns.