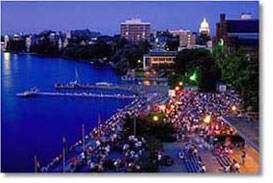 Next week CoolTown Studios tour will be documenting Cambridge, MA, and how it became the 23rd largest economy in the world, followed by Madison, Wisconsin, the most creative medium-sized town on the creativity index.

The prelimary word on Cambridge is that it is now suffering from its own success, as the immense popularity of the places has caused skyrocketing rents, rents that only retired executives and national chains can afford. Nonetheless, it has spawned new creative pockets, and we’ll find them for you.

The essence of Madison has been described as in the image above – having a beer* with friends at The Terrace on a lazy Saturday evening overlooking the sailboats on the lake as the sun sets amid a cool fall breeze. We’ll fill you in after we experience it for ourselves.

*or non-alcoholic drink of choice