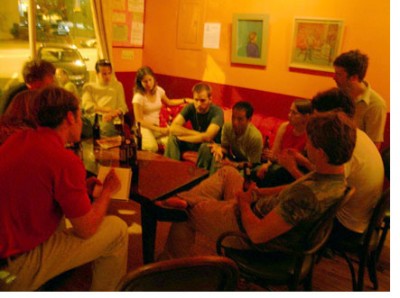 So of course, tonight we asked the University of Georgia students, especially the ones closest in association to the creative class…

The downtown is centralized, it has a sense of place, it’s different, it’s walkable, it has arty music scenes, a great country scene, bikes everywhere, it has a dense feel, it has people everywhere, the aesthetics are beautiful, it has diversity, a transient population, there’s a wide variety of live music throughout, it’s a liberal island, the streets and buildings are human-scale, there’s a real mix of retail, and it has a sense of being built over time, organic and doesn’t feel like a real estate development.

Some of the downtown criticisms were that 60% of it feels like a tourist trap, the retail is not for the people who live there, many of the shops sell overpriced merchandise and there’s no grocery store.