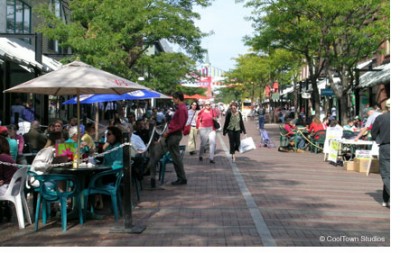 What’s immediately striking for such a small town of 40,000 people is that there is such a large pedestrian-only zone at its heart. I mean, how often do you see a Mapquest entry look like this for a small town in the middle of recreational wilderness? Most cities that are at least ten times larger argue that they don’t have enough pedestrian-mall-supporting people and tenants to have just one block, yet Burlington has three, and just opened the fourth! In fact, they were laying the brick while I was there.

I asked their economic development specialist, Ed Antczak, how this came to be. He replied that Burlington had a visionary mayor, Bernie Sanders, who quite simply made it happen. He laughed when I mentioned that most cities don’t think pedestrian malls are economically successful.

One intriguing note – the side of the pedestrian mall closest to the University of Vermont (which is seriously advocating for what may be the country’s first pedestrian-only campus) is the most successful, with the most independent merchants. The opposite end, with the national chains, has more turnover, though even that is rare.