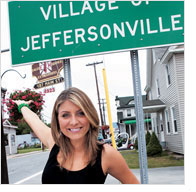 That’s right – The Discovery Channel’s TLC is producing a new show called Town Haul where the host, Gorder, “will oversee a team of skilled designers, carpenters and craftspeople as they work alongside townspeople to re-imagine, re-paint, repair and restore small towns across the United States.” The first victim (just kidding) is tiny Jeffersonville, NY, population 500.

This is largely about aesthetics – there’s no emphasis on economic development and community building. However, I’m guessing that the world class talent assembled for placemaking and design will make a signficant impact in the town. I imagine it’ll be that much more pleasant for its residents and visitors to stroll through and spend a little more time and money on the merchants in a revitalized main street. I’ve always wondered what would happen if Hollywood took some of that exorbitant talent and capital they pour into building natural and timeless-looking streetscapes, and applied it authentically to a struggling town center… I guess I won’t have to wonder much longer.