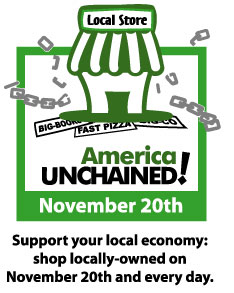 As our trade deficit grows, the American economy becomes less stable and thus the dollar grows weaker. Both the proactive solution and the reactive inevitability is to buy local, and that ultimately leads to supporting local businesses since most of what the American national chains buy (ie Wal-mart) are increasingly from overseas – as this story reveals.

So, kudos to America Unchained!, a one-day buy local promotion (albeit Nov. 20th) sponsored by the American Independent Business Alliance and supported by 20 cities. Not surprisingly, many of those cities are rising on the creativity index, like Colorado Springs, Colorado; Denver, Colorado; Boulder, Colorado; Louisville, Kentucky; Albuquerque, New Mexico; Santa Fe, New Mexico; Raleigh, North Carolina and Austin, Texas, while many of the rest are small towns not yet on the radar screen. What does that mean? It means that the progressive towns are trendsetters, and that means going local.