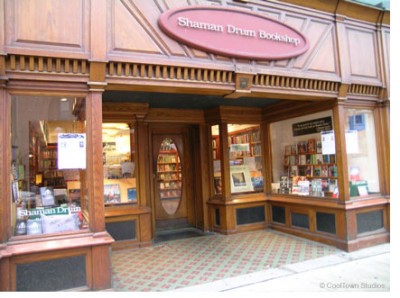 That’s the tagline of this article on why independent businesses rock, and Wal-mart, uh, doesn’t.
It notes that “in Iowa alone Wal-Mart wiped out 555 groceries, 298 hardware stores, 293 building supply stores, 161 variety stores, 158 women’s clothing stores, 153 shoe stores, 116 drug stores, and 111 men’s and boy’s clothing stores in 10 years.” One of the premier business consultants in the world, C.K. Prahalad, states “The world’s largest company today, Wal-Mart, was created to serve poor people.” Just remember that the next time you hear about a Wal-mart opening near you. The irony is that poor people don’t need 99% of what’s in one of them.

That’s why you may want to read the article to remind you of why you like that unique restaurant you always eat at… “Places like these are the social and commercial backbone of our communities. They also expose the lie that independent stores are a thing of the past, destined to go the way of the horse and buggy. Neighborhoods all over town are now flourishing with vital, valuable, locally owned businesses. America’s entrepreneurial urge is strong and can only be extinguished if folks like you and I turn our backs on small, distinctive stores in favor of big, boring boxes.”