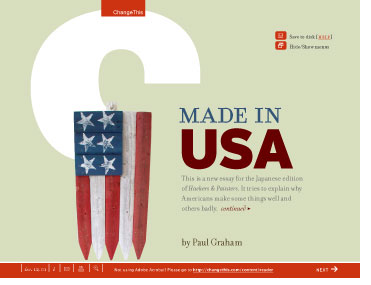 In this edgy ChangeThis manifesto, Made In USA, the Paul Graham, the author of Hackers & Painters claims, “Americans make the best software and films, and the Japanese the best cars and consumer electronics. There’s a reason for this, and it goes far deeper than cultural differences or the quality of autoworkers, it has to do with who’s in charge.

…and it’s the people in charge and/or the prevailing culture that prioritizes design and craftsmanship that will produce the kinds of products and places that emotionally hook us. Graham states that the overwhelming culture in the U.S. is the ‘just-do-it, blow ‘n go’ mentality that sacrifices good design, while other countries are often just the opposite.

The winners will be those who combine the two…

“Apple is an encouraging example. They?ve managed to preserve enough of the impatient, hackerly spirit you need to write software. And yet when you pick up a new Apple laptop, well, it doesn’t seem American. It’s Swedish or a Japanese company.”