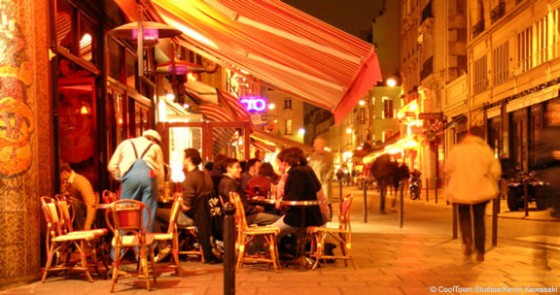 You get places like this. The scene seems so natural, but it’s actually very unnatural here in the U.S. (the shot is in Paris).

First of all, there’d be a line of cars parked alongside the curb, which would immediately block any view more than 10′ in front of you. This is one reason why waterfront seating seems so dramatic by comparison. The buildings on the opposite side of the street would be pushed back and largely out of the picture, mainly because the street here won’t accomodate four (or even two) lanes of traffic.

The furniture, wall design, the lighting and even the awning prioritize design and craftsmanship, something the U.S. is better at in software than in real estate. Granted, this generally raises costs, but not if you know a thing or two about shabby chic.