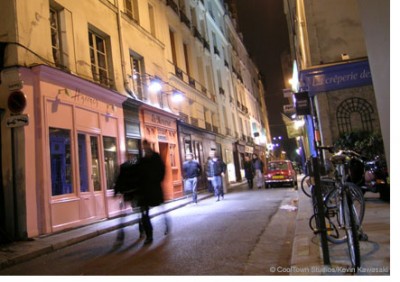 The MINI Cooper is one of the biggest automotive success stories in the last few years. BMW announces a 1-Series to come to the U.S. Volvo plans an even smaller car than the smallest car they’ve introduced in a decade. Mercedes is even planning a new brand called Smart, where two Smart cars can fit in one parking space. Honda, Ford are following suit. Chevy already has the Aveo.

What’s going on here? While a lot of it has to do with rising gas prices, Americans aren’t buying these cars because they’re driving them on the freeways. No, they’re buying these because they aren’t driving them on the freeways, and for the first time in a long time, they don’t have to, because city downtowns are back, becoming more desirable than the suburbs for the first time in 50 years.

That means you’ll see more pedestrian-oriented places like above, such as where only a small car feels comfortable (for a change). It may also be why so many European car companies are listed above – they understand the pedestrian-first market very well.