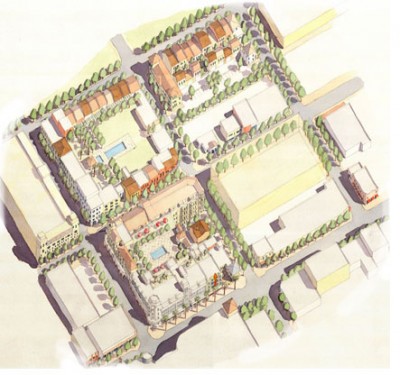 The CoolTown approach to bringing economic and social vitality to an area via a compelling pilot project doesn’t have a better legislated example than South Miami’s HomeTown Plan: “The “100% Models” idea was to choose an area (however small) then totally transform it to create as dramatic and visible an impact as possible. Instead of spending precious funding across large areas, public funds are to be concentrated on these 100% Models.”

The parking is hidden, the place doesn’t look like it was designed by one company (it won’t be), and it has a true village feel with the varied building types at human scale – it should be rather obvious which are the 2.5 blocks that make up the project. It was also master-planned by the well regarded Dover Kohl – let’s just say they ‘get it’.