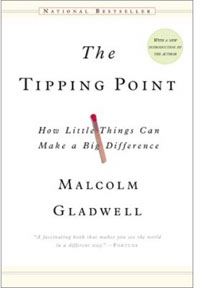 Have you ever wondered why it is, that say, on one fine spring day in 1999, a downtown condo can be had for under $100,000, then just three years later an urban buyer’s epidemic breaks out and you can’t find one for less than $300,000? Thousands believe that business consultant Malcolm Gladwell covered the reasoning quite well in his best-seller, The Tipping Point: How Little Things Can Make a Big Difference.

The three rules of epidemics, as he sees it:

1. The Law of the Few. It doesn’t take much. It starts with a visionary (maven) that achieves something extraordinary, like my friends who bought a run-down condo for $59K and fixed it up for $35K. The connectors in the building, the people who know everyone else, start telling their neighbors about how strikingly good the place looks, and soon people start renovating theirs. The salespeople start telling their friends, and soon sales prices begin escalating.

2. The Stickiness Factor. Gladwell talks about how the show Blue’s Clues quickly surpassed Sesame Street as childrens’ favorite, mainly because the concept was extremely simple to get – and thus it stuck in one’s mind. A stunning loft building priced at half the going rate because the neighborhood is still on the fringe is pretty sticky.

3. The Power of Context None of this would have happened if the suburbs weren’t becoming congested, city downtowns were attracting more and more vistiors to cultural events, and diversity was becoming the norm. People were just looking for a reason to buy downtown – they just didn’t quite know it until a $59K hovel became a $300K suite.

Key implementation note – focus on transforming the first 10% of your target market. That’s the tipping point. The epidemic will take care of the other 90%.

Are you aware of any positive local epidemics? Please comment below…