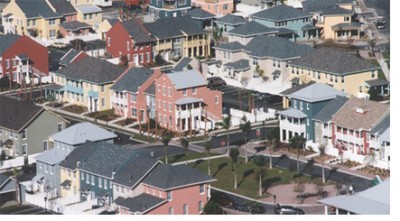 Everyone knows what ‘the projects’ are – ugly, federal-government-financed, high-rise stand-alone buildings surrounded by parking lots in neglected regions of the city, or low-rise concentration-camp-looking complexes. No defined public or private spaces, just leftover space in between the structures.

Thank goodness for evolution. This is an image of Bradenton Village, a $70 million ‘garden urban village’ replacing failed federal government projects (the origin of the term ‘the projects’.) $25 million of that came from the federal government’s Housing & Urban Development (HUD) HOPE VI program, and look, they didn’t screw it up! Having a visionary guy like Henry Cisneros as Secretary of HUD in the early 90s helped, as well as, say, less racist government leaders than those in the 1960s in the heyday of ‘the projects’.

The point is, if the federal government is going to get involved in housing, they may as well get it right. The good news is that if something with their fingeprints on it can look this good, then the future looks to be pretty darn exciting when more innovative, creative entrepreneurs begin to design and develop the next generation of communities.

Thanks to Robin ‘Roblimo’ Miller for the heads up.

What kind of influence has the federal government had in your city? Speak your mind below…