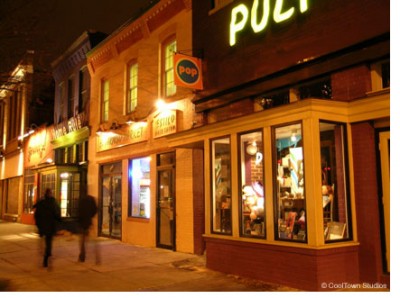 There’s been a heated discussion lately in at the urbanism watering hole, and that’s, “Is there a difference between a main street and a shopping street? The answer is yes and no.

Yes, there’s a difference: Main streets are typically known to serve a neighborhood. Shopping streets, which include outdoor malls, cater to an entire region. Main streets have neighborhood-oriented venues like a coffeeshop, hair stylist, deli, pub, etc., many of which are independent businesses, while shopping streets are more like outdoor malls that tend to attract the chains, often because there’s a single owner or the rents become quite expensive. Main streets are perceived to be more authentic because they happen organically with multiple, diverse, unpredictable owners.

No, they are the same thing: Sometimes a main street becomes so popular that people begin visiting from greater distances, and it’s that larger population radius that’s required to generate enough sales for retailers. However, this is all too often a temporary phase, as the increase in traffic tends to bump up the rents, thus forcing the neighborhood venues (ie supermarket) out in favor of the Starbucks, Urban Outfitters and Ruby Tuesdays. You can’t blame someone for choosing Starbucks over a mom & pop coffeehouse that serves mediocre coffee in an uninspired space, which is why we try to help them compete.

Do you live near a main street or shopping street, or both? Speak your mind below…