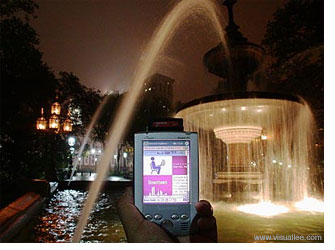 Continuing yesterday’s Small towns that ‘get’ it…

Any city that wants to attract the creative class, knowledge workers, young professionals and enterpreneurs needs to support a free WiFi downtown. Period. The aforementioned group views a WiFi network as the previous generation does for a highway network – comprehensive and free… and guess what, it’s a helluva lot cheaper. The City of Alexandria, VA is the latest city to sponsor free WiFi downtown, and estimates a cost of $20,000 to start, $7800/year to maintain a WiFi downtown. Let’s see, that’s about the same cost as the pick-up truck that carries the ‘road closed’ signs for street repair.

So what’s the controversy with a city-sponsored WiFi network?

– The U.S. Internet Industry Association doesn’t like that it takes business away from their internet service provider members. That pales with the loss of business by not having an information network in the business center of town.

– City officials say it’s unfair to taxpayers that don’t use the internet. Uh, that’s 8 cents a year per person for a city of 100,000. How about those who don’t drive that pay for roads? Or about the lack of new community amenities because job creators (city tax revenue generators) can’t get online downtown?

– Other detractors wonder if it’ll even be used. They probably don’t know many people in the target market previously mentioned.

So where are these WiFi cities? Tomorrrow…

Do you have free WiFi throughout your downtown? Why not? Speak your mind below…