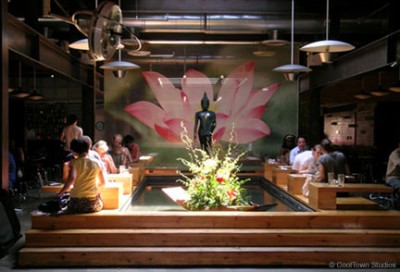 Hey folks, just got back yesterday from a two-and-a-half week vacation to my home in Hawaii, then my best buddy’s wedding, so I’m a little late on today’s post. I had the other posts running automatically.

I’ve been eating out quite a bit lately because of this, which makes me appreciate the handful of restaurants that serve up a one-of-a-kind dining environment and entrees less than $7. Sea in Williamsburg, Brooklyn is one of those places (pictured), which at first look, screams trendy. However, because anyone can afford to eat there – Williamsburg’s artists, a part-time swing dance instructor, a Mom who told me she loves bringing her kids there in the earlier hours – it embraces a diverse crowd, which helps break that trendy stereotype – everyone the same age, dressed the same way (mostly black), at the same income (yuppies). Later at night, when the drinks hit standard prices, the trendiness does start to settle in. That’s when the creatives go to the beer garden in Queens.

The sad thing is that the best-designed, coolest-looking venues are becoming synonymous with the word ‘trendy’. The bottom line is that we need more of these places that look trendy in design, but not in the crowd, and that starts with making at least some of the menu at down-to-earth prices for down-to-earth people.

Know of any places that look trendy yet attract a diverse crowd? Speak your mind below…