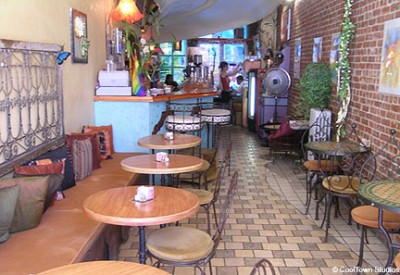 Do the cafes and coffeeshops in your neighborhood have stories, soul… values?

Fast Company magazine did a little informal study of company values and found that “having at least some values of two words or more pumped up returns by 16% over the S&P, companies with all one-word values lost 2%, and Berkshire Hathaway, whose core values run some 5000 words, beat the S&P by 65%.”

So here’s a suggestion and litmus test if you’re opening up a new venue – do you have your values written out, extensively and with passion, say, like the Shunits? (cafe pictured)…

“The Grand Cafe opened in May 2002 with the dream of mixing the energy of American culture with the slow relaxed middle-eastern lifestyle – and using great food and atmosphere to do it. Sharon and Shunit, the Israeli owners of the cafe, love America but miss the lazy afternoons without clocks and the warmth and traditions of the Mediterranean kitchen. The Cafe, which Sharon and Shunit built themselves and has been featured in New York films, brings these worlds together through its spicy atmoshere, world music, fresh food, and, above all, the energy of the staff and customers alike.”

Know of any favorite venues that have an inspiring story stating their values? What would be yours if you were to open your own place? Speak your mind below?