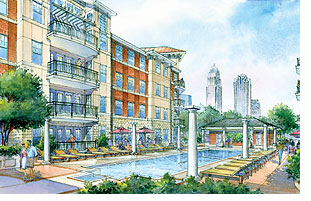 That is… attainable housing that doesn’t look like subsidized affordable housing. For example, homes in The Renwick (pictured) are said to be starting in the mid-100Ks. Seems to be a great example of no-frills chic.

As I’ve stated time and again, it’s simple supply and demand. Charlotte is meeting the demand with a tremendous boom of housing construction in the downtown that’s boosting the population from near non-existent in the early 90s toward 10,000 today. Even so, some local experts say the demand still isn’t being met, and that the median home price overall is staying low because single-family homes in the outskirts are becoming less desirable.

How important is affordability in the downtown to you? Speak your mind below…