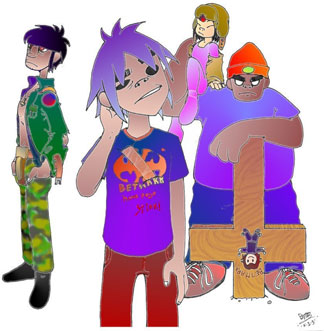 Inspiring places have an energy, a vibe, a freshness that says you’re going to experience things you haven’t before, whether it’s food, music, people, design, ideas or a unique combination of them all. The secret yet unasked question is, “How can a place maintain such a demanding creative edge?”

Ask a group that recenty sold 6 million albums, Gorillaz. It’s a virtual band presented as cartoon characters, and no one knows the exact line-up of artists except Damon Albarn of Blur, the only permanent musical contributor. The band is truly virtual, collaborating one project at a time (the hollywood model – from which CoolTown Studios gets part of its name btw) and bringing new artists and producers in as the band evolves…

…and that’s the art of innovation. It’s about bringing in new talent to allow a place to evolve, which is why national chains can stifle a neighborhood’s soul and vitality, and perhaps why many bands just don’t seem to have it anymore after the first album or two.