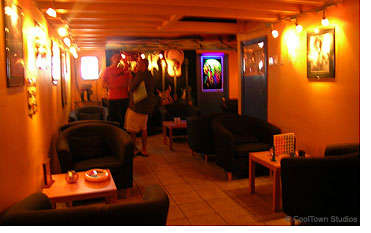 Connect Four, Trivial Pursuit, Backgammon… the games you played as a kid… or as an adult. As stated in a previous article, Next gen housing for changing households, the urban crowd stays home less, goes out more. So, some venues are bringing the living room to them.

Pharoah’s Rock & Blues (pictured) in Adams Morgan has a ‘living room’ on their second floor that provides the aforementioned ‘board games’ for their patrons to use. The best part is that you don’t have to put it away when you’re done, and have you ever played Connect Four with a gamepiece in one hand and a Corona in the other?

In another part of town, and in Irish pub tradition, Fado’s has trivia night on Monday nights, which I was at tonight (last night.) No less than a 150 people or so form teams to answer trivia that comes in five rounds of ten questions. The place is packed and lively every Monday, a stark contrast to other venues that consider it a slow night.