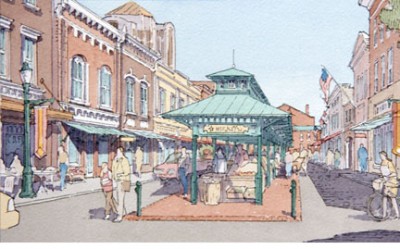 The timing is right for pedestrian streets. While just a vision for now, this could become a built reality if Roanoke, Virginia’s leaders have their way…

What is it? It’s a truly pedestrian experience that emphasizes people and the restaurants and stores on it, planned by DPZ & Company, often mentioned on this website. Some of the features:

– Outside balconies on buildings, like in New Orleans, to bring people to the street on more than just the ground level.
– Moving the farmers market stalls outside to the center of the street rather than inside buildings.
– Moving the existing enclosed food court restaurants to face their seating outside.
– Adding a movie theater to draw temporary crowds to the street, and downtown housing to draw permanent crowds.

You can read the news article here, and see images here.