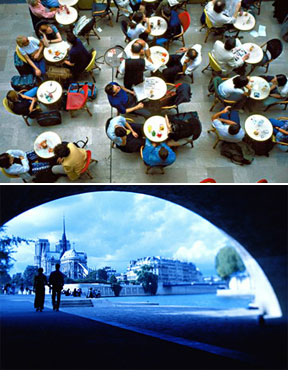 I’m delving into sensitive material here, but since the heart of community and business is fundamentally made up of one-one relationships between people…

An Oxford graduate, Richard Ecob conducted a study that modeled a community of daters to a ‘community of atoms’, since they exhibited similar physics (hey, don’t shoot the messenger.) If you’ve seen What The #$*! Do We Know?!, it wouldn’t seem too far-fetched.

The study’s final word if you want to build strong relationships? Stay put in a dense network.

The findings: “The research suggested that multiple daters, those who form many relationships, were less effective at finding the right partner than those who remained in one place and let others come to them. If you have a complex network and you stay in one site you see more traffic coming through,” Ecob said. “It’s a denser network, so there are more possible matches.”

Interestingly enough, he finds that these multiple daters don’t build lasting relationships, but indirectly assist in others doing so by breaking up ‘weak relationships’. Better to find out sooner than later I guess, if the relationship (whether a significant other, a business partner, a company, or neighborhood) is meant to be short-term or long-term. Now, don’t be using this to rationalize going about doing weak couples a favor, OK?!

As it relates to this website, if you’re already thinking about moving to another neighborhood/city, it’s probably in your best interests. If you value enabling long-term relationships, maybe moving long-term to one with a dense (eg walkable) network of people would help.

As you may see, this is not rocket science. Just last night I asked someone to help out a friend looking to meet new people. His reply without pause, “Location, location, location,” and promptly named the two densest neighborhoods in the city. Then again, he actually is a rocket scientist…