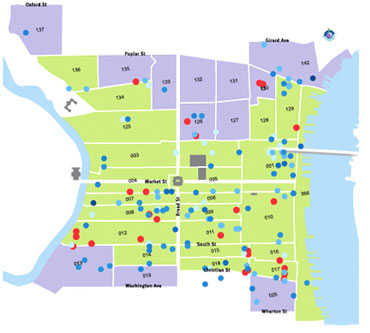 How dramatic is the excitement of moving to Philly’s downtown?

The area in green shows where people are moving in droves to what they identify as ‘downtown Philadelphia’*. The areas in purple shows where current construction and renovation will lead to an expansion of this perceived ‘downtown’. That means a lot of people are and will be calling downtown home, about 20,000 to 30,000 of them in this decade.

The details are included in this housing study, which also indicates no shortage of demand in the forseeable future. The fact that ‘married with kids’ is only 10% of net new growth in households is a major reason, as well as dozens of other related trends.

What are the top reasons people are citing for moving downtown? New condo residents reported they selected their new unit primarily because of “proximity to shopping, dining and entertainment, its perceived safety and because of its price.” The report also adds, “With American cities cleaner, safer and more prosperous than at any time in the last 50 years and with movies and television offering appealing images of city life, the fundamentals remain strong for downtown living.”

As is typical, the housing prices are still a bit too high for most to afford, and it’s affecting diversity, where 87% of new condo buyers are white. But that’s the beauty of a fast-increasing supply – prices will have to drop sooner or later.

*The area shown in green is based on 22 Census tracts that met all three of the following factors:
1. Neighborhoods being marketed by the real estate industry as ‘Center City’;
2. Neighborhoods experiencing strong housing demand and dramatic appreciation;
3. Neighborhoods in which the average household size was 1.5-1.6, compared to the citywide norm of 2.5 persons per household.